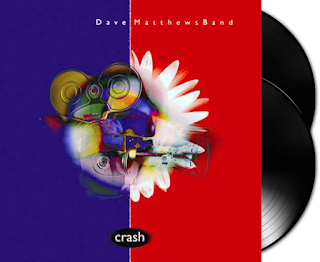 It's official. Crash is coming to vinyl in 2016.  Two listings popped up today on MusicDirect.com and ElusiveDisc.com with a release date set for July 15th, 2016. I do want to advise people to wait to pull the trigger on the preorder until the official DMB store and the Warehouse store put up their pre-orders to see if there are any special bonuses they get. Also, Warehouse members get a discount from their store, so the price may be cheaper. No reason to rush out and pre-order a copy immediately, there are still copies of Under The Table And Dreaming for sale so I'm sure this won't sell out, either.

The listings at the pre-order links I posted above  didn't have much info, but our friend Dobyblue shared a little more insight into the release. He says the release "was cut by Chris Bellman directly from the original analogue stereo master tape, pressed at MPO." He also says it's an all analog chain and there will be three tracks per side. So for those wondering, yes, the #41>Say Goodbye segue will be preserved on one side. At this time, they haven't announced what the bonus features will be. We posted an unreleased songs article a few years ago which gives some possibilities for what the bonus tracks could be. Deed Is Done, Little Thing, #36, Don’t Burn The Pig (Pre-1998 Version) and True Reflections were recorded in the studio but not released. Also, according to this article, Get In Line and Help Myself were recorded during the Crash sessions. So it's possible we could see any of those as bonus features.

Going off the 3 tracks per side format, this is what the track listing could look like:

Chad Jones
I started blogging in 2009 with Snubie.com, (chadizzy1.blogspot.com) to help people quit smoking by switching to snus. That grew to a forum I co-founded with my buddy Nash, GoSmokeless.org. I've also started a podcast, The Snubie.com Snus Podcast, and then a random blog of my musings and whatnot, Pop Culture On Wax, located at PopCultureOnWax.com. In case you can't tell, I like to write.