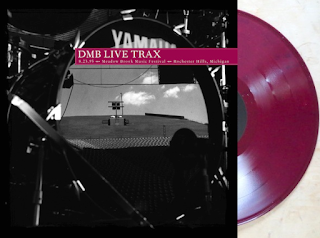 Note:  This photo is concept art I made last year and not official art.

Last year, I made this post for what I'd like to see released this year by DMB in the vinyl world. I'm surprised to see that one of my picks is actually making the cut. Though I had hoped LT5 would come for Record Store Day, I'm glad it's coming at all. Wax Poetic, which is one of the most reliable websites for Record Store Day rumors and information, has posted this tidbit of information today.

The official information for Live Trax 5 says, " 8.23.1995 at the Meadow Brook Music Festival, Rochester Hills, MI. This show took place during the tour for Under the Table and Dreaming, DMB’s first release on RCA Records. Dave Matthews Band was just beginning to move from playing smaller clubs and theatres to playing larger amphitheater settings. This release is another crew favorite. David Ryan Harris, guitarist for Dionne Farris’ band, performed with DMB during six songs of the concert. Rhyme and Reason is a notable song featuring David Ryan Harris harmonizing on guitar with the violin and saxophone parts of the song. A twelve minute Exodus, played rarely in DMB history, was also a highlight of this show. Jimi Thing is also exceptional at fifteen minutes. The encore begins with a soulful solo performance of Typical Situation by Dave Matthews and then explodes into All Along the Watchtower also featuring David Ryan Harris."

It's that time of year again, and we're closing in on Record Store Day: Black Friday. My favorite rumor blog for Record Store Day, Wax Poetic, is no longer updating, so we're having to do a lot more searching for rumors. The Steve Hoffman Forum has a thread with a lot of info in it, so this list of rumors is pulled from several posts in that thread. Some of these sound pretty legit, so I'm pretty excited about it. Anyways, here's the rumors for this year's upcoming RSDBF.

Run-DMC - The Singles Collection [5x7'' Box] (picture sleeves, indie-retail exclusive) Get On Down 65€

Suicide File, The - Some Mistakes You Never Stop Paying For [LP] (Clear Vinyl, first time on vinyl in US, limited to 1000) Indecision Records 21€

Various Artists - Our Impact Will Be Felt (A Tribute To Sick Of It All) [LP] (Kelly Green Vinyl, first time on vinyl, limited to 750) Think Fast Records 26,50€

Posted by Chad Jones at 8:12 PM No comments: