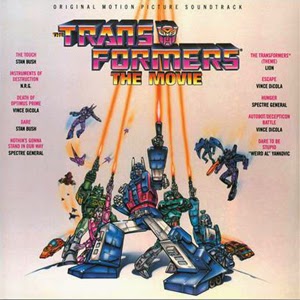 I have been wanting to buy this for years but didn't wanna pay the flipper price people were asking on eBay and Discogs. When I saw this up for preorder on SoundStageDirect.com I was overjoyed. Sure, it's cheesy 80's music, but it rocks. I grew up watching Transformers and I love this movie. Music On Vinyl is releasing this on 180 gram virgin vinyl. SSD says, "The Transformers: The Movie is a 1986 animated feature film based on the animated TV series by the same name. The story takes place in 2005, 20 years after the events of the TV series' second season and serves to bridge into the third season.[3] Set to a soundtrack of synth-based incidental music and hard-driving metal music, composed by Vince DiCola, the movie has a decidedly darker tone than the television series, with detailed visuals in Toei Animation's typical anime film styling, and like G.I. Joe: The Movie, Decepticon villains that are more menacing, killing without hesitation."