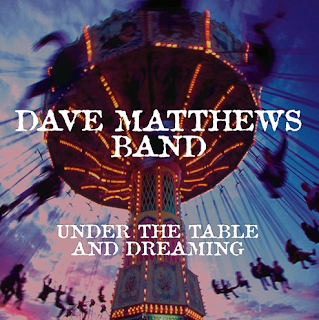 We knew this day was coming, but weren't sure when. A listing at elusivedisc.com confirms it - November 24th, 2014 is the official release date! It's marked at $39.99 and the listing is pretty vague about source information and bonus material, so for now it basically just says it's coming.  We found out about R2T on April 24th, and Live Trax 30 was announced on May 7th about 13 days later. I'm hoping with UTTAD we see LT32 as a 1994 themed Live Trax release. I'm sure once the Warehouse adds their information they'll include info on the CD re-release as well as any bonus material that will come with it.  Will update this post as we receive more information!

This item not eligible for any further discount offers!

Under the Table and Dreaming was the 1994 debut album from the Dave Matthews Band. The album contains the single "What Would You Say", which features Blues Travelers' John Popper on harmonica. Two other singles from the album are "Ants Marching" and "Satellite".

The DMB Store opened their UTTAD Reissue section today, which contained info on the mastering/source material, though not who did it or where it was pressed. But via the store listing for UTTAD, we now know it was mastered from the original flat analog tapes and will be pressed to 180 gram vinyl. We also know there were new lacquers, which were cut by Chris Bellman at Bernie Grundman. The package will also include a download card and an 8 page booklet with previously unreleased photos of the band. We also now know the track list, and that the bonus tracks will not be on the actual vinyl itself.

The listing also says that Dancing Nancies and The Song That Jane Likes are previously unreleased studio tracks, so I'm assuming that means these are things we have not heard before and not from the Rutabaga Sessions/Quad City demos as I theorized recently.  Very exciting news!

Side A
1. The Best Of What’s Around
2. What Would You Say
3. Satellite