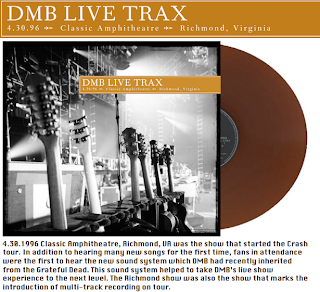 I've known about this for a while, but it's not like we didn't see it coming. People are starting to report about it publicly so I guess I should talk about it too. Yes, it's official, Live Trax 4 is coming on Record Store Day in a 4 LP, 2,000 pressing release on colored vinyl. Not only that, but in the same vein as Music On Vinyl's Alice In Chains reissue, Live Trax 4 will contain an etching of the Firedancer logo on Side H. Granted, most people could probably care less about that, it's a novelty, and will probably look cool when you're spinning it, but hey, it's something cool.  Remember, this art is concept art, we don't have the official art yet, or know what color the actual vinyl will be.  Brown was the closest thing I could find to that tan banner on the album cover, but I've heard people suggest gold or clear, both of which would look much better than poo-brown.  And as always, if you can't get your hand on one of these, the Warehouse will release a black vinyl edition later on.  With 2,000 copies, I can't imagine this one will be too hard to get.  When they pressed 1,000 each of LT2 and LT3, there weren't many people who couldn't get ahold of them.

If you're not familiar with LT4, 4/30/96 at the Classic Amphitheater in Henrico, VA was the first show of the Crash Tour, and the "Crash Release Show". It was also the first show with the band using the sound system they inherited from Grateful Dead, and the first show to introduce Multi Track Recording. From the Two Step opener to the four song encore, this is definitely going to be a strong release. The test pressings yielded a beautiful, clear sound, so we know the mastering is on point with what we've come to expect from the Archive Series Vinyl from DMB.
Posted by Chad Jones at 5:44 PM